Just in case anyone is/was ‘bemused’, moi did not put paw to keyboard. Moi only cut-and-pasted Tony Burke’s admirable summary. To make its provenance abundantly clear …

Until this week you could say that Malcolm Turnbull may have adopted all of Tony Abbott’s policies, but at least he had made the policy debate less angry and over the top. Can’t say that now. This was the week Malcolm Turnbull finally went full Abbott. The transformation is complete.

1. The first sitting week of the year only really started when Cory Bernardi stood up to announce his departure from the Liberal Party, surprising no one. Penny Wong had a parting compliment for Cory Bernardi, surprising everyone.

“Now, there are very few issues, in fact there are almost no issues upon which I agree with Senator Bernardi. But I do respect one thing – he does stand up for what he believes in and he is clearly no longer prepared to stomach the rank hypocrisy of a leader who clings to office by parroting views in which he does not believe.”

Watching the drama unfold with his digital popcorn, Sam Dastyari made a great observation.

“You have Senator Bernardi who is quitting a party that he runs! Who leaves a party that does whatever you want them to do?” 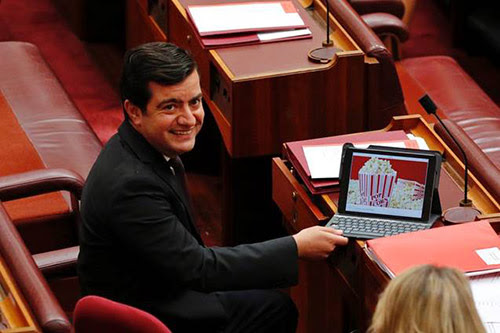 2. There’s a lot that can be said about Malcolm Turnbull’s weird and angry 10 minute rant about how obsessed he is with Bill Shorten. Don’t get me wrong, I’m a firm believer that people should be defiant and passionate in defending their beliefs. I just wish we had a PM who could have that sort of passion to deliver for the rest of Australia, not one who reserves his most passionate speech to tell us how much he hates his opponent.

On Thursday, it was still a few minutes before Question Time was due to start and Malcolm Turnbull was already in the Parliament when Rob Mitchell stood up and said this:

“Yesterday we saw one of the nastiest speeches by the Prime Minister since the election night dummy spit. The second he was questioned about his attacks on families, he spat the silver spoon across the dispatch box. The Leader of the Opposition had the figures; the PM had the tantrum.”

Only a few minutes earlier Labor MP Joanne Ryan drew attention to the PM’s disgust at people he termed “social climbers” and asked:

“Who put the cordial in the PM’s Grange?”

Because Malcolm Turnbull had his tantrum, a lot of people seem to have missed what we were debating. It was a motion moved by Bill Shorten which opposed the Government’s cuts to families, criticised the debacle of telling pensioners they had Centrelink debts when they owed nothing, and pointed out that the best way for the Government to save money would be to abandon its $50 billion handout to the biggest companies. Bill moved to condemn the Prime Minister for being “so out of touch that his hopelessly divided Government punishes families, pensioners, carers and new mums while giving a $50 billion handout to big businesses.” Bill was on 7.30 with Leigh Sales that night, and had this to say.

And Jenny Macklin, always standing up for families and pensioners, rose to her feet to bring a distracted LNP back to the question.

3. Social Services Minister Christian Porter must wish people would stop listening when he talks. In Parliament, trying to justify his cuts to family payments he said:

“We invest all of the money we’re saving in the Family Tax Benefit system.”

This is wrong and Jenny Macklin was quick to let him know:

“Under the government’s policy it’s cutting $2.7 billion in family payments and only spending $1.6 billion on its child care policy. Is the Minister aware he was misleading the Australian people, or is he just plain incompetent?”

Hang on. Almost all? There’s a gap of more than $1 billion. It seems Christian Porter thinks that’s just a rounding error.

4. Western Australia heads to the polls on 11 March. Labor’s WA MPs used the first Matter of Public Importance debate of the year to draw attention to the Barnett Liberal Government’s chaos and dysfunction, which mirrors the state of the Federal Liberal Government. Colin Barnett and the Liberal Government have grown arrogant and out of touch, creating record levels of debt and deficit without delivering the jobs and services and infrastructure WA needs. But WA Labor Leader Mark McGowan has new ideas and a comprehensive plan for WA jobs.

5. Tanya Plibersek has been tireless in her efforts to hold the Government accountable for its $30 billion cuts to schools, right when we’re seeing $50 billion going to the Government’s big business buddies. Economists are telling us in no uncertain terms that investing in education gives better returns. Bringing it back to the street level, Tanya drove home the sabotage of school education:

“If you walked down any street in any electorate in this country and you stopped a random stranger and said, ‘Here’s $2,000. You can invest it here, giving the banks a tax cut, or you can invest it here in your local school,’ what would parents say? This is not a mystery.”

1. A short memory is a dangerous thing in politics. On Wednesday, Josh Frydenberg thought he was having a go at Labor by quoting comments from Penny Wong in 2009. There were two problems with this. One: Frydenberg had forgotten that 2009 was the year Malcolm Turnbull had supported Labor’s policy on emissions trading. Two: Everyone else in the room remembered. You could watch the energy draining from his face as the gaffe dawned on him and he quickly found a way to finish his answer and get well away from the microphone.

2. Labor has a plan to level the playing field by reforming negative gearing concessions. This week, the Libs scare campaign around housing prices has changed direction once more. No, twice more. Kelly O’Dwyer says house prices will go up, Malcolm Turnbull says house prices will go down, and on Wednesday Scott Morrison says they’ll go up again. It’s enough to give you whiplash. It’s hard to keep up to date with these videos. I put this one up on Wednesday and then on Thursday George Brandis changed their scare campaign again. Admittedly it doesn’t matter whether or not Brandis is trying to run a fear campaign, there’s something intrinsically scary about that man.

3. The Government had delusions of power all week. Mark Butler called out Josh Frydenberg for trying to blame renewable energy for the blackout in parts of Adelaide. Mark had the statement from the Pelican Point generator, which had been ready to supply the power required to avoid overload, and the federal regulator, which reports to Frydenberg, had refused to tell the generator to turn the power on. Tanya, Chris and Mark showed Frydenberg how to flick a switch from off to on. 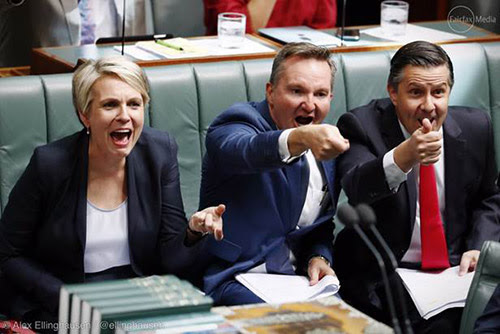 4. And apparently yesterday was the day we were meant to bring our Christmas presents to Parliament. Scott Morrison arrived with a lump of coal. We must be the only country in the world with a government saying the solution to extreme heat and climate change is fewer renewables and more coal. 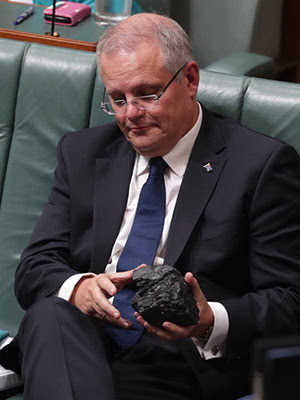 5. The Government’s Centrelink debacle has many victims. Pensioners and other Centrelink recipients have been sent debt notices and had pensions cut off, even though they owed no money. The Government itself has confirmed a 40% failure rate of those cases that have been publicly raised.

Linda Burney stood up for the victims in Parliament and said: 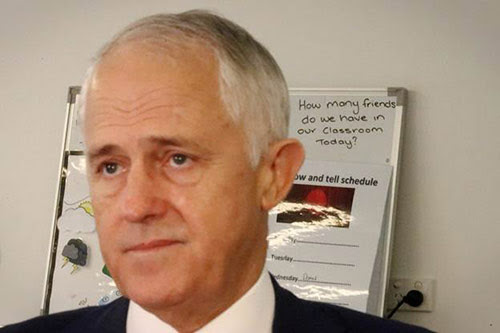 How many friends do we have in our classroom today?

We’re back in Canberra Monday so I’ll give you another update in a week.

PS – Turnbull’s only passion is for power. Here’s the song of the week.

Midnight Oil – Power and the Passion