Today’s Guest Author is Jennifer Wilson, with her take on Cardinal Pell and the Royal Commission into Child Sexual Abuse. Thank you, Jennifer, and you are definitely not alone.

Shorten also makes very clear that the royal commission into child sexual abuse is a key pillar of the Gillard legacy.

Father Doyle, the CA Royal Commission witness from the US, was superb. His honesty and compassion were most evident. He gave many reasons for the behaviour of priest and the church and what needs to be changed.

The commissioners really appreciated his testimony. Doyle was effusive with praise for the establishment and conduct of the RC and on behalf of the “good” clergy in the US he expressed heartfelt thanks for what they are doing and how they are going about it. He said that of all the similar inquiries around the world this RC stands out and its findings and deliberations will be so important in the future.

Eat your heart out Pontificating Paul Kelly and your ilk!

"It is past time for George Pell to return to Australia” to face abuse allegations – Bill Shorten. #auspol #qt
RETWEET IF YOU AGREE!!! pic.twitter.com/2UrHkJBGJF 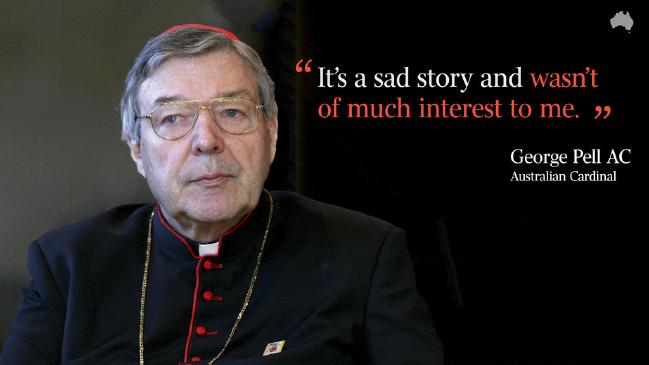 The Catholic Archbishop of Brisbane, Mark Coleridge, this morning expressed his horror and outrage at the latest report from the Royal Commission into Child Sexual Abuse on the extent of that abuse within his church.

The Archbishop was at pains to reassure listeners that after years of intense and ongoing scrutiny (thanks to former Prime Minister Julia Gillard ordering the Royal Commission which catholic MP Tony Abbott and his catholic henchman did everything possible to sabotage) catholic schools are by now among the safest possible places for your child to be.

While he might have a point he is missing the point: the former head of the church in Australia, Cardinal George Pell, is himself under investigation both for alleged child sexual abuse, and for his role in covering up the offences of other priests.

Cardinal Pell is currently in Rome, in a position that keeps him very close to Pope Francis. Victorian Police yesterday submitted a second brief of evidence against the Cardinal to the DPP. The Vatican is a sovereign state from which Pell cannot be extradited. When last required to appear before the Royal Commission, Pell pleaded a heart condition that left him unfit to fly long distances. He gave evidence via video link.

I would like to ask Archbishop Coleridge how anyone can trust the catholic church in Australia when its former head is under the protection of the Pope. I’m struggling to imagine this situation in a secular organisation in which 7% of employees were guilty of sexually abusing children, and 4,400 alleged cases of child sexual abuse had been brought against it.

As a fish rots from the head, so has the catholic church. I’m neither heartened nor impressed by various catholic clergy and lay commentators wringing their hands at the awfulness of it all. Had it not been for an atheist ordering an investigation, this would still be hidden, and the perpetrators still protected.

I’m willing to bet a great deal that no one, but no one inside the church would have taken action to prevent the sexual abuse of children, or to instigate useful investigations that resulted in prosecutions, and demands for moral accountability.

This will not be over until those at the highest level are held accountable, including the Pope. Until churchmen and catholic commentators are willing to acknowledge that accountability starts at the head, nobody is safe in the catholic system, and the fish continues to stink.