I have been following the blog written by Sally Baxter Girl Reporter for some time. She posts on a variety of subjects, all of which I find fascinating. Her most recent post is a splendid trip down Memory Lane, and I am most grateful for Sally’s permission to republish it here.

Bargirls and journalists have a lot in common. They are basically lazy, but work very hard for short periods of time – Arthur Hacker.

The numbers of foreign journalists in Hong Kong ebbed and flowed to the tides of the war in Vietnam so it’s fitting, and not entirely uncoincidental, that the Hong Kong Press Club was opened in Wanchai in December 1973, just months after the rock n roll war finally ended.

Its arrival sits right in the middle, between the end of old Wanchai, made famous as The World of Suzie Wong, and the new one, with its smart office blocks and trendy bars.

During the war of course Hong Kong was awash with young Boy and Girl Reporters who came from all corners of the world hoping to make their names as war correspondents. Many stayed and took jobs on local newspapers and magazines, both during and after the war.

They included my parents, who arrived in 1967 and stayed 20 years. They had founded the Hong Kong Journalists Association in 1968 and five years later the Press Club in Luard Road was to be its first official home.

Until then, meetings had often been held at our place in Macdonnell Road, and members could also get together once a week at the Singapore Hotel which gave them use of a conference room at no charge.

But when it came to socialising – as many journalists are wont to do – there was the Blue Sky Bar in Jaffe Road, the unofficial press club throughout the Vietnam War.

According to the late Hong Kong artist and historian Arthur Hacker, the Blue Sky Bar gave credit and beer was only $1.20 a glass. And, unlike the bargirls in the big clubs, the Blue Sky girls did not pester the locals to buy them girlie drinks (set at an unaffordable $4.90, according to Hacker). Girl Reporters were also welcomed, or at least tolerated, at the Blue Sky.

Chief among the Blue Sky girls was Brandy Nancy. I met her once, many years after the bar had closed. I was working for my father on Computer-Asia magazine, out of a tiny office at the back of the, by then, new and expanded Press Club in Lockhart Road, also in Wanchai.

“Brandy Nancy bought the young journalists drinks, lent them money, paid their bail and visited them in hospital. She drank her brandy neat and in large quantities. But woe to the journalist who didn’t pay his bar bill on time. The moment his wage packet appeared so did Nancy, who would chase him around his desk, to howls of abuse from his colleagues, until he was shamed into paying his bar bill.”

Like Brandy Nancy, many of the Blue Sky bargirls had nicknames. Hacker records Nature’s Child, Dirty Diane, the Skull and – my own personal favourite – The Splendour that once was Maria.

The end of the Vietnam War in 1973 brought hard times to Wanchai with many bars, including the Blue Sky, closing down. In an effort to boost business, licensing hours were lifted that year and the surviving bars no longer had to close at 2am.

That forced the closure of the Professional Club in Luard Road, which had been exempt from the 2am licensing laws as a ‘professional’ organisation. Until 1973 it was the place in Wanchai, where you could eat and drink cheaply if you worked late.

According to Arthur Hacker, American sailors would wander across the road from Pinky’s tattoo studio to the Blue Sky Bar to show off their new artworks. Here’s the original version of Arthur’s cartoon depicting a sailor and a journalist at the bar. When he included it in his 1976 Hacker’s Hong Kong he significantly altered the middle figure, in case my father sued him for defamation, he said. Hacker gave it to me when Dad died, saying he was probably safe now with the old man out of the way. Over to you, lawyers, on whether I’m ok to reproduce it here.

It was hidden up a narrow stairway, easily missed if you weren’t in the know, and all the night people gathered there – the waiters, the coppers, the musicians, the bargirls, the journalists.

Now the night people were dispersing from the crammed little quarters of the Professional Club into the bright lights of the new, brassy, high rise Wanchai that was rapidly taking shape around the small, old fashioned building, just off the main glitter strip of Lockhart Road.

But the journalists stayed, taking over the lease and giving the Hong Kong Journalists Association its first official headquarters, the Hong Kong Press Club, which was officially opened in December 1973 by the Governor Sir Murray Maclehose.

The HKJA committee took up a collection to buy and engrave a pewter beer tankard, to present to His Excellency in honour of the occasion.

“Sir Murray became a favourite of everyone when he braved the narrow staircase of our less-than-grand building in Wanchai to open the Press Club,” my father said.

“Someone checked with the right people, or so we thought, and we had the tankard on the bar, chilled and shiny, when he strode in the door. ‘What will it be?’ I asked confidently, as the waiter prepared to fill it with one of our small selection of tap beers.”

The Governor ordered a pink gin. Wanchai had changed forever. 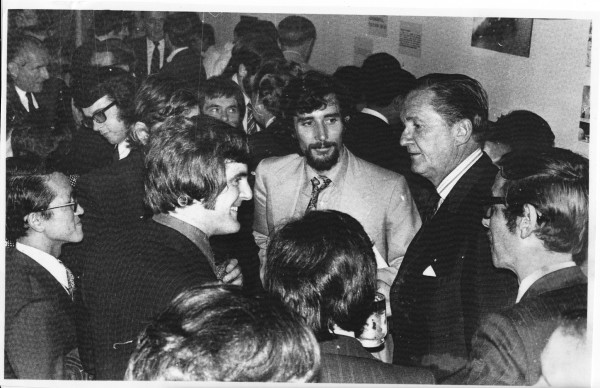