Our Guest Poster is none other than Kampong Palmer Trev, whose delightful remarks yesterday evening on his betters caught my eye. Trev (if he will forgive my informality) was kind enough to agree to the “appropriation” of his comment, and even more kindly supplied photographic evidence. Thank you, Trev, and may this be the first of many.

My neighbours are away for a long weekend of swimming competitions in Sydney – so I’m looking after their two cats and the two that own this place and consider me their maid. I really want my head read for feeding them ‘roo meat – all four now expect it. 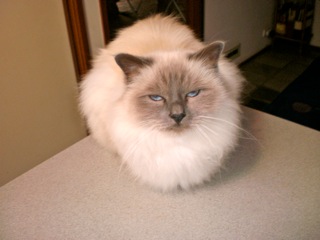 “You can stick your Aldi canned muck … and we have had enough dry stuff, Trev”.

There are, of course, those who say that anthropomorphism is wrong (“No, darling, we are educated people who do not do that sort of thing. Animals are animals and we have no right to project human values. While we do believe in the brotherhood of man, it’s no reason, my dear, for you to associate with them – why else would we be sending you to that school? Now, eat your carob, sweetie, and before you go off for your music lesson, let me explain why when you are grown-up you should vote Green and have a Family Trust”).

Bugger ’em. Life is too short – and why have domestic animals if you can’t talk to them? Yes, lah, as in every other election I’ll be voting ALP.

Old Sporty (about 16 years old and built like Stalin crossed with a Yak fighter aircraft), from next door, is allegedly a Russian Blue cat. IMHO, the only Russian thing about him is his appetite – and it’s just as well I never have vodka in the house. I’d have visions of waking in the morning and finding Sporty reeling around the joint with a bottle in his paws, and meowing the “Volga Boat Song”. That black cat T-shirt on the linked post has some truth in it.

This is Canberra. Thick feathery winter doona onto bed today and a Chinese quilt on top – Ok, maybe should go under the doona (next time in China I’m going to buy one of those thick quilts from Shanghai filled with spun silk). If I find any trace of cat fur or a dug-out coriander seedling in the next 2 days, I’ll be invoking the ‘Kampong Palmer Internal Security Act’. Punishment without trial – do not pass go and do not collect $100. One swift swipe of the rotan (in this case, a whippy bamboo tomato stake). And to think I have a cat called Harry – named after Lee Kuan Yew (LKY). The uppitty little tabby bastard (“Singapore Tiger”) now wakes me up in the morning for the sake of it. It used to be in order to be fed. He must be about 5 or 6 years old now – in his prime. I’m still to discover if he has a law degree and a fondness for defamation litigation.

Cats – they probably taste good out of a very hot wok, with a bit of oyster sauce and a hint of ginger. You would be better off with a labrador as a pet. Then again, you could have an old black cat like the Tunku Jazz. A cat who thinks he is a labrador, or an old and rather benevolent Malaysian ex PM who lived long and had a fondness for slow racehorses, fast women and whisky. – Jazz even likes going for a walk and is always happy to see you when you arrive home. Jazz is my kind of moggie.