Hello Pubsters. I have arrived home safely and well after a little jaunt around some of the Western part of the USA. Travelling was fun be it is good to be home. We where greeted with uncontrollable howling for about 1 minute from Ned and Syd then they had a bit of a sniff at the luggage then walked of for a snooze. Seems as though we aren’t as important to them as we thought. Ungrateful sods. The cats turned up a couple of hours later demanding food , No hello ,welcome home or anything from them. More ungrateful sods. The fish did what fish do, swam around wanting food.

WE started in Honolulu for a few days as the OH isn’t fond of flying that much and a non stop trip to the Continental USA would have seen the plane meet by security for here and a hearse for me. As it was she just made the journey to Hawaii in a more or less stable condition. We didn’t get of the Main island and just relaxed and did the tourist things. Pearl Harbour National Park was good. Honolulu in my opinion is just a bigger version of the Gold Coast but was good for a stop over and to prepare for Main Attraction. A bonus is that we had cleared immigration in Honolulu so avoided the long queues and apparently not very nice officials at LAX. The persons we dealt with in Honolulu were friendly and helpful.

We flew direct to San Francisco. arriving rather late at night but our flight path gave us a excellent view of the city at night.

San Fran. is a great city  with plenty to see and do. I won,t go into minute details of what we did but as well as the usual Fisherman’s wharf , Cable cars  Golden gate etc. we had a great time just walking around stopping at a shop/eatery/bar here and there and jumping on a bus to see where we end up.The wave Organ is pretty amazing. Made up of pipes that change sounds when the water rushes in .

After nearly a week in SF. It was time to move north to Seattle, home of the Space Needle, Pike Place Markets among other thing, and more importantly for me Boeing aircraft .

After a while there and discussion we decided to bite the bullet and do a little road trip Seattle to Salt lake city. Not something most people do but what the heck we thought. Hired a car and off we went through Washington,Oregon,Idaho and Utah. Now I have driven most of Australia and we have a great country but nothing we have can match the scenery over there,Little towns, Farms ,

And much better roads

Arrived in the capitol of Mormons and was surprised to find that not every male wears a white shirt and tie and asks me if I  wanted to preached to.

After a few days here and again with much discussion we hopped over to Sin City Las Vegas.The excuse for this was that Grand canyon tours are better from there,but in all truth people told us we had to go at least once while we here and I must admit I was interested to have a look. I actually liked Vegas, It was loud.bright.noisy and non-stop but the people were friendly, we saw a show called ” Absinthe ” at Caesars palace. it was pretty good sort of a circus,vaudeville show for Adults only. Caesars Palace is huge but in my opinion looking a bit dated. Lost a bit of cash on the tables but OH won some on roulette so we broke about even.

The Grand Canyon tour was amazing. We did a chopper tour, leaving vegas flying out to the canyon, Over Lake Mead and Hoover dam and the into the canyon itself. It really is huge. Landed and had some lunch and scenic walk along the edge with views then took off back to Vegas .Expensive but close to the highlight of the trip. ON our flight where a couple from LA. celebrating there 25th wedding anniversary . Apparently he proposed when the were hiking there years ago so returned on a bit of a nostalgic trip. Terrific couple and we hit it off really well. OH and his wife got on well,both joggers and fit ,and with a handbag addiction. They own a landscaping company in LA, and is pretty successful. We met up for dinner that night and had a great time. Our plans were to go to San Diego then back to San Fran before the flight home,but they convinced us to go to LA and they would show us around ,so being foot loose and fancy free that is where we ended up.

You don’t really realise how big LA is until you fly over it. It is massive. We flew into Burbank Airport  and got good views. Our New Friends live in a suburb called Alhambra about 20ks from the CBD. 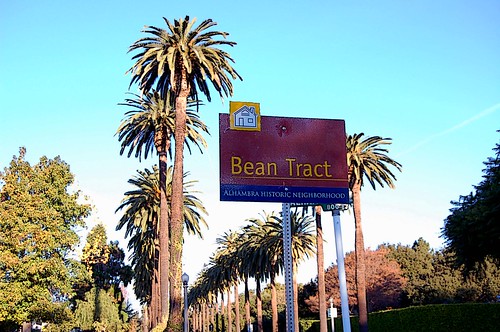 WE saw a lot of LA and met some fantastic people. Too much to go into here but am proud to say avoided the Universal studio tours and the red bus homes of the famous tours though our guides did point out a few places. Mrs 6 pac went shopping  with her new friend and returned with a handbag from rodeo drive which she refuses to tell me how much it cost, so I am guessing it was over $100.

After LA we flew back to San Francisco for 2 nights then back to Honolulu for another 2 days then home again.
So there it is a very brief quick overview of our us adventure.I have left out heaps but that is the general gist of things.
We originally planned to go to the East coast as well but decided after being in SF for 3 days that in order not to rush through we would stick to the west and do the east next time.
The yanks in general are lot like us in many ways. Most people are very friendly and helpful. We made many new friends and swapped email address and such. Australians still seem to be very popular and well liked over there.
It’s great to be home though. With all our faults and troubles we really don’t have it that bad here. Especially now that the idiot is no longer in the top job.I would have loved to have seen him defeated in a general election and see him sulk giving a concession speech.
Maybe he wouldn’t have given one going on what I’ve read on his dumping

Thanks to Fiona for keeping the pub running as she always has.I will try and help out more and give her a well deserved break
Have a good time.