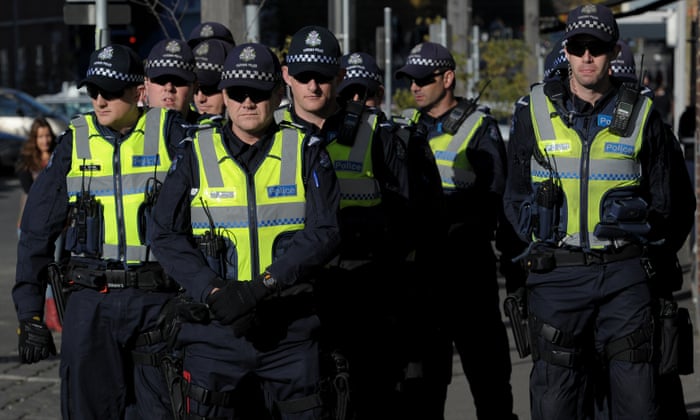 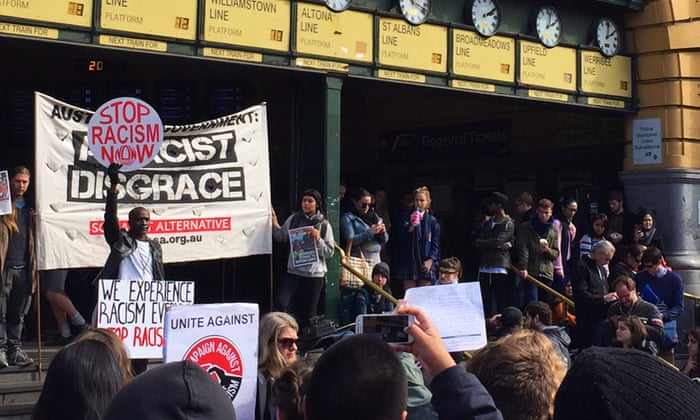 I first read Guest Author Kate M’s excellent piece last Wednesday, at AIMN, and decided almost immediately that it was worth republishing for a whole host of reasons – in particular, because it illustrates so well the way this disgusting abbottled regime is sending Australia down that long and slippery slope to perdition. Given the way the topic has been overwhelmed by discussions of “domestic” violence, the Canning by-election etc., I am even more determined to ensure that Kate’s searing analysis gets more exposure than I suspect it has received.

As most people know, laws came into effect on 1 July this year making it a crime for an ‘entrusted person’ – such as a doctor – to talk to the press about what’s going on in detention centres like Nauru or Manus Island, with a threat of two years imprisonment if they do.

Having put up a shroud of secrecy around detention centres, there is now a Bill in the senate which, if passed, will allow the use of deadly force by guards in those detention centres. The bill is called the Migration Amendment (Maintaining the Good Order of Immigration Detention Facilities) Bill 2015 – or the ‘Use of Force’ Bill.

Despite the fact that Human Rights bodies have huge concerns about this Bill, it has received very little press. Here’s why you should be concerned about it.

If passed as is, the Bill will allow ‘Authorised officers’ – basically guards – within Detention Centres to inflict ‘grievous bodily harm’ where they personally believe it is reasonably necessary to protect life or prevent serious injury. And the Explanatory Memorandum to the Bill spells out that:

It specifically states that Authorised Officers may kill.

And the test to whether it’s legal for them to use deadly force is a subjective one. This means it’s legal for an Authorised Officer to kill where they believe it was reasonable to do so in order to protect life or prevent serious injury. This may sound logical, but the problem with a subjective test – rather than an objective one – as argued by the Asylum Seeker Resource Centre is that:

it’s very difficult to prove what someone subjectively believed.

The current training provided to Authorised Officers of these centres is a four week course. They get a very similar level of training to that provided to Shopping Centre security guards or Night Club Bouncers.

Contrast this with a sworn police officer – who has less power than an Authorised Officer in one of these detention centres – but has at least three more years of training.

As I mentioned above, from 1 July workers like doctors and nurses can no longer legally disclose what is happening in the detention centres to a journalist.

So hypothetically, if an Authorised Officer saw a young asylum seeker coming towards him, and mistakenly thought that asylum seeker was carrying a weapon which could cause him harm, that Officer could shoot that asylum seeker. Not only would that guard not be prosecuted for this – under the Border Force laws, there’s a good chance we wouldn’t even hear about it. And if we did hear about it because a doctor spoke out – the person going to jail wouldn’t be the Authorised Officer who killed the asylum seeker, it would be the doctor who reported it.

Reports of horrific incidents in Detention Centres almost barely make the news these days. Gillian Triggs and the Human Rights Commission released a report earlier this year outlining the treatment of kids in detention. In particular the report spoke of the sexual abuse of children. And yet there was more press about Abbott and co attempting to discredit Gillian Triggs than there was about the children.

The UN Human Rights Commission also released a report in February which detailed circumstances of torture in our detention centres. And still there was very little response from the media.

Recent evidence to Senate Estimates hearings indicated that there have been 15 more sexual assaults between February and May this year, two of which were of children. And just this week a Guard has come out and alleged that asylum seekers have been water boarded.

This is what’s happening in our detention facilities now. The government is clearly unable to guarantee the safety and good treatment of detainees under the current laws – and yet they want to give Authorised Officers the power to use deadly force.

The Bill is currently before the Senate. There were discussions about it today – with Liberal senators arguing in favour of the bill and Labor and the Greens arguing against it. David Leyonhjelm has also publicly stated that he will not support the bill. Its fate now rests in the hands of the remaining crossbenchers.

This is another one of those news stories that just seems to be passing the main stream media by. If you care about our Government giving this type of power to a private contractor – the power to use deadly force without risk of prosecution – then it’s up to us to spread the word.

We are all separated by only six degrees – true, it’s been proven – so if you care about this, tweet about it (#UseofForce), talk about it on FaceBook – or if the mood takes you, contact one of the cross-benchers:

It,s Friday . I’m Feeling Good and so should we all. The libs are in damage control over just about everything. The shock Jocks and MSM Cheer Squad are going ballistic and refusing to believe that most sensible people have come to the conclusion that their prick Abbott is a dud .

They have cheered for him ,tried their best and thrown enough dirt around about labor and the Unions to fill Sydney Harbour twice but still after all they have done the public have rejected their pick Tony.

That,s why I am feeling good this Friday and we should all be a bit upbeat now. Plus their is plenty of stuff to be happy about.

Australia in the cricket have made more than 100 runs.

Astronomers have found a star with 3 super earth’s

NED and Syd have found a intellectual equal.

And Did I mention the Libs are down in the dumps

SO I AM FEELING PRETTY GOOD . HOW ABOUT YOU?