Skip to content
HomeLet them eat cake: humiliation is no way to run a country.

The SMH reports this morning:

Foxtel in spotlight over customer 'spin-down'
Foxtel is set to come under intense scrutiny when it reports fourth-quarter results next month amid evidence that a considerable number of its customers has abandoned its drama and movie packs – some of them in favour of new, cheaper streaming services led by Netflix.

The cable and satellite TV monopoly, which is owned by News Corp and Telstra, has experienced significant “spin-down” – customers cherry-picking channels and cutting their bills – since it changed its pricing model in November. Sources are divided on whether the negative reaction has been comfortably within the anticipated range.

I can now no longer remember when we exorcised Foxtel from our household. Probably 2 or 3 – maybe 4 – years ago. We haven’t missed it at all.

We had a very basic package, but were still paying $90 a month. Ridiculous, especially when you consider the barrage of ads they ran.

We retained the physical cable, however (which they installed at their expense, twice, for different residences) and enjoy 120 mBit internet as a result, through Telstra.

What waste though! Murdoch and Abbott between them – and let’s not forget the craven Malcolm Turnbull – gutted Labor’s FTTP NBN in favour of the crock of shit that now has stolen the name “NBN”, but isn’t fit to lick its bootlaces. They demolished Labor’s scheme based on lies about roll-out, asbestos scares (remember Turnbull getting up in parliament and screaming that the entire NBN would have to be cancelled because of a Daily Telegraph report that someone had asbestos in their pit at Richmond, NSW?) and pig-headed ignorance.

It wasn’t just quicker download speeds they got rid of. It was vastly quicker upload speeds, so potentially fast (even for basic packages) that they could have changed the face of Australian telecommunications in a single stroke. We were going to be a model for the world, but the power elites decided we weren’t good enough for that.

We could have had a resurgence of regional areas as hubs of commerce. More fathers and mothers could have worked more often from home, as efficiently as if they were in their CBD offices, taking strain off main roads, child care, and inflated CBD commercial property prices, right down to $150,000 car parking spaces. It wouldn’t have happened overnight, but it would have happened, and Australia would have better for it: emotionally, commercially and inspirationally. Family life would have benefited as well as government coffers in not having to provide these services for busy, absent parents. Add in health networks, remote diagnosis, even upscaled search and rescue, biological research and literally thousands of benefits greater than their apparent scale that speed can deliver.

But no. Murdoch had his investment to get back. To serve his ROI we killed-off one of the key possibilities for an emergent Australia in the 21st century. In its place we left a legacy technology, with its antiquated, dedicated hardware – set-top boxes and smart cards, recording devices that only work sometimes and are full of bugs, all providing a sub-standard image quality. Murdoch was not only malignant in his evisceration of the Labor NBN, he was lazy. And Abbott went along for the ride.

Netflix (and its ilk) came along and even WITH one hand tied behind its back, they seem to have wiped out, not Foxtel altogether, but its profits, which in business is just as damaging an assault. You do 90% of your work just to pay the bills. If the last 10% of your trading effort constituting the profit is erased, you may as well not get out of bed in the morning.

We have seen this clinging on to legacy technologies and stranded assets in other areas too: coal, iron ore, fossil fuel electricity generation. The old firms, too fat and lazy to innovate, bought a government instead, cheap. A few lazy million in donations and special favours – freebie “Industry Awareness” ad campaigns, astroturf “Institutes” of this or that, friendly TV interviews with even friendlier, foot-rubbing interviewers – got them a Coalition ready to traduce their own beliefs in the free market in favour of maintaining those decrepit, but once profitable giants on life support for an extra few years… maybe. Blood meet stone.

Gerard Henderson on Insiders on Sunday was a perfect illustration, one among a pathetic many, when he said that he loved coal, loved it… why? Because Victoria built its 20th century economy upon it cheap, dirty emissions. We should be thankful for the inefficiency, disease and the pollution brown coal produced, and we should preserve it forever in thanks, he seemed to be saying. Even the numpty Insiders were able to show a spark of understanding, cutting him down by pointing out we are now fifteen years into the 21st century.

The Coalition’s snouts-in-the-trough attitude to public money also seems to have survived, with Bronwyn Bishop’s helicopter joyrides, and much more to inevitably come out soon. Let the people catch the train, or drive in cars. Madame Chopper will soar above them, and then make them pay for it, to rub in the humiliation.

That’s what this government is all about. There’s the aggressiveness, sure, but bullies quickly move on to humiliation. They not only want to see their enemies hurt, but they want them denigrated and humiliated as well.

From the hapless priests in the infirmary at Manly seminary, to the concrete truck drivers whom Abbott tried to force to waste precious time washing their trucks daily, the the women of Sydney University SRC who were subjected to schoolyard catcalls at meetings and physical intimidation in offices, to Julia Gillard, to Kevin Rudd, to Bill Shorten – all of them hauled before Royal Commissions – Abbott’s modus operandi has been about humiliation. And the prosecutions: Slipper, Thomson, even Hanson. For God’s sake they were no angels, but they didn’t deserve what Abbott dished out to them. Give him power and he will use it to try to destroy reputations, social standing and ultimately the self-worth of his opponents.

Dead, buried, cremated… and humiliated. It makes Abbott, and his cronies feel better about their sorry selves.

At random, throw in Hockey’s comments about housing affordability, his observations that poor people don’t drive cars, Abbott’s own line that renters don’t mow the lawns (written by him, but spoken by Hewson), Bishop’s outrageous expenses and her arrogant excuses for them, her lectures to others on propriety, her pursuit of Peter Slipper, their mouthpiece’s Daily Telegraph assaults upon dole bludgers, pensioners and other allegedly lazy, eliminatable scourges of our nation, the war on the ABC where they dictate to it its internal administrative arrangements – or else – and you’ll see a common thread of humiliation behind the nastiness and the violence. 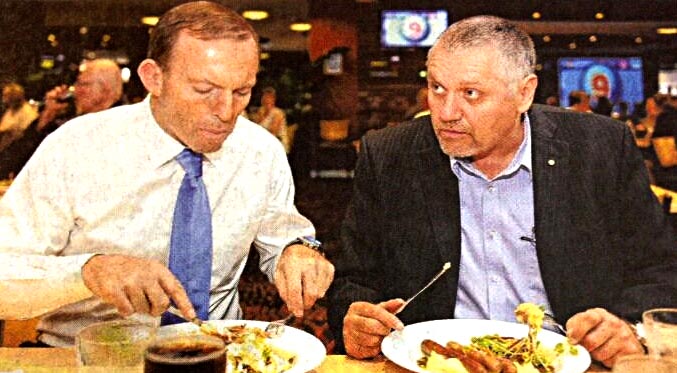 Australia is being run by thugs and bullies. They are the crawlers to power who will sell out anything for patronage. The patrons themselves throw a few crumbs their way and pump them up so that they come to believe they are better than ordinary folk.

That is the story of everything in Australia at the moment, from the cruddy, lazy, outdated Foxtel service to Chopper’s helicopter ride.

It’s as near to what makes them tick as anything else I can think of.

475 thoughts on “Let them eat cake: humiliation is no way to run a country.”