Today’s Guest Post is by Catalyst; as always, many thanks!

Despite the romance implicit in George and Ira Gershwin’s song and its pleasant imagery of care, are we content to be ‘watched over’? Is it a comfortable arrangement, one that’s in our best interests? Or is it a step too far in to our personal lives, as some fear? Alternatively, as others suggest, is it a necessary evil, an efficient means of combating fraud? Exactly what does it mean for us today?

Thanks, but No Thanks

Back in 1985-87 a controversial proposal for a national identity card was launched. To be labelled the Australia Card, it drew furious protests and heated opposition. Australians baulked at the idea of having to carry identity documents, like those living under some petty dictatorship.

Suggested at the National Tax Summit, the Australia Card’s stated purpose was to stop tax avoidance, as well as health and welfare fraud. In 1986, the Hawke Labor government attempted to get the legislation through the house; but met fierce opposition in the Senate.

Frustrated by repeated attempts to pass the legislation, Bob Hawke asked the then Governor-General, Sir Ninian Stephen to call a double dissolution of parliament. This was granted and Australians went to the polls.

After the July 1987 election the Hawke government was returned, but still with a hostile Senate. Before a joint sitting of parliament could be called to pass the legislation (Labor had the numbers), a drafting flaw was identified, which meant the bill was withdrawn. And the proposal was not revisited.

The identity card idea was not to resurface until 2005, when then Prime Minister John Howard floated the suggestion again, in the wake of the London bombings. He suggested such a card would combat terrorism and also tighten immigration controls. Despite this, the proposal did not win sufficient support.

Not Only – But Also…

Shortly after the rejection of the initial Australia card proposal in the 1980s, the Tax File Number system was introduced for all working Australians. It identified the worker, remaining with them throughout their working life. It could also be used to check a person’s eligibility for welfare.

And then there is the Medicare Card, which began with a scheme introduced by the Whitlam Labor Government in 1975 called Medibank .This was planned to provide more affordable health care for everyone. It was to allow free treatment for patients in public hospitals, paid for by a small levy, but with low income earners granted an exemption. Hospital costs were to be shared equally between the Federal government and the states. The concept aimed to provide a fairer system, to spread the costs, and to be easier to administer.

The scheme was rejected by the Senate on three occasions: 12 December 1973 and August and December 1974. After a joint sitting following a double dissolution election, the legislation was passed and became law 1975.

A few months later Malcolm Fraser was elected and ordered a review of the programme The findings were not made public, but he embarked on changing how Medibank would work, essentially undermining it.

In 1976 the Fraser government established a private health fund called Medibank Private. Numerous changes followed, tinkering at the edges of the publicly popular programme. Perhaps the most insidious was the ability to opt out of paying the Medibank levy by taking out private insurance.

With the election of the Hawke Labor government, Medibank was saved from further changes and returned to its Whitlam-inspired roots. It was renamed Medicare in 1984, perhaps to better represent the concept of what it was intended to do; provide care at a time when most people are feeling vulnerable .

Throughout the 1980s the Coalition niggled about Medicare. The 1983 election might be best remembered for John Hewson’s attempts to explain the GST, but changes to Medicare were also in the mix. Bulk billing remained a permanent subject of contention.

By 1993 it seemed all sides of politics had accepted the inevitability of bulk billing and it remained basically unchanged throughout the Howard years. Other changes to health policy, such as the 30% private health insurance rebate were brought in, to counter the decline in health fund membership. It remains to be seen what changes to health care may be proposed by the Abbott government, though recently, some ideas have been rumoured.

Up until now, the Medicare Card has worked as a de-facto identity card. It is especially important for those people who do not have a drivers licence.

Big Brother is Watching YOU! But Who Cares? 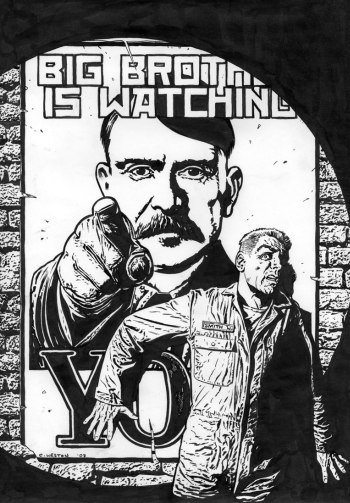 The dystopian world envisaged by George Orwell in his novel 1984 has been rendered less threatening by demystifying its most feared concept-that of Big Brother. No longer is it a synonym for pervasive state spying – it’s merely a harmless concept for a reality TV show. It seems most people are comfortable with a little light surveillance, especially when it carries a significant cash prize. Older people may shake their heads, but younger ones shrug off their concerns

It is my contention that what we were not prepared to do by compulsion- carry identity cards, we have embraced voluntarily, so allow me to explain what I mean.

Almost all adults and a majority of children carry an identifier with them at all time. What’s that? Despite about 80% of households having a fixed phone line, it’s the mobile phone.

According to Roy Morgan research 88% of the population aged over 14 years owned a mobile phone in 2011. We can assume that the figure is probably higher now. A mobile (and a smart one at that!) is seen as an essential in everyday life. And every year phones have more enticing and clever applications, designed to tempt even the most luddite amongst us.

Roy Morgan reports that even the over 65s have a mobile phone uptake of 72%, while the 25-34 age group had the highest proportion at 95%.

The Australian Bureau of Statistics reports on children’s mobile phone usage. It finds that single parents are more likely to let their children have a mobile phone (38%) as it enables them to stay in contact with family. Younger children are less likely to have phone than the key 12-14 age group (76%).

Once acquired, it’s a convenience few will wish to relinquish .I know of one father who offered his 20+daughter $100 in exchange for giving up her mobile for one day. She refused.

What many people forget is that when the phone is switched on your every move can be traced. Even when it’s switched off, apparently it still possible to trace a mobile .The United States security agency NSA reportedly can do so. No one will guarantee that even if you take the battery out of the phone you will be undetectable.

And of course as many phone scandals have demonstrated, you can be eavesdropped on, your conversations monitored and possibly logged.

Assuming you are not a terrorist, does it matter? Should it matter? We presume our governments are benign, and do not mean their citizens harm. But are we being corralled like sheep?

What protections do we have under law? There is the Office of the Australian Information Commissioner (OAIC) with powers to regulate the Privacy Act 1988, as well as the Freedom of Information Act 1982. It operates under the auspices of The Department of the Attorney General.

The OAIC has the authority to investigate complaints about the possible mishandling of personal information by Australian, Norfolk Island and ACT government agencies, as well as private sector organisations. It is also responsible for investigating and reviewing decisions made under The Freedom of Information Act.

New controls over who can access to information and what they must tell you are due to come into force in March 2014. Details are available on their website.

Enquiries have revealed that the OAIC is currently unaware of any proposals to cut its funding. Time will tell if the situation remains, potentially they could be busier than ever, as there is more erosion into our privacy – by supermarkets, by websites – which might be more fully explored in a further post.

575 thoughts on “Someone To Watch Over Me”