Ian makes a welcome return as Guest Author with the first part of an allegory. Many thanks, Ian.

The alpha was uneasy.

Every day he sensed the main pack retreating from him. He still had his lesser pack. The collection of the betrayers, the weak of mind, the insipid and cruel who had helped him prevail in the contest with the Alpha female.

She still lives, high up in a mountain overlooking what was once her territory.

He paid no heed to the slinking cur who replaced her. He was despatched with neither trouble nor emotion. Curs such as him always are ….. always will be. They help in the kill and wear the blood as a badge. Yet when their courage and pride are rewarded they find themselves snarling, snapping and scrabbling with others of the lesser pack over the discarded entrails and orifices. Others, the main pack, understand sacrifice of the ego is the essential strength of the leader. The cur, like the alpha, understands only the feeding of the ego. The blood as a badge. Empty, but fitting reward for the cowed. Such will always be the fate for some of the lesser pack.

Alpha looked around, his vantage point the hill once used by the Alpha female. The main pack spreadeagled below him, seeking any available shade from the sparse shrub surrounding the murky, stagnant waterhole. A place once remembered as fresh, vibrant, with clean refreshing waters and game enough to fill empty bellies and strengthen whelping pups.

The oldest female, her withered dugs scraping along the ground as she approached with the cringing deference he demanded, sought to comfort his unease. As did the others of the lesser pack. The other two competing alphas, eyes averted, took up a watching station at his back. The alpha paying them cautious, watchful heed, detected no threat from either as long as they continued to circle, probing the weakness each sought in the other, neither seeing that the weakness they sought could be found in themselves and by knowing and understanding one could defeat the other. The two, along with the alpha and others of the lesser pack, also kept close watch on the coming and going of the alpha female. Her bitterness, hidden under a cloak of obeisance but directed at the Alpha female, starts to show more and more. Her coat, once glowing, now faded. Her seasons becoming shorter and attracting scant attention from males who once chased and fought ….. believing her to be a prize worth parading and defending. She ranges far from her home territory and is begrudgingly afforded a place at other packs’ kills, but rages that the Alpha female was always given the choicest meat while she fights for the scraps left for the lesser in any pack. She fails to see the subtlety of the insult directed at her. It is easier to believe that the Alpha female coerced the clear-sighted into blindness. The alpha, the lesser pack, all can see the bitterness eating her from within. None offers comfort or advice. None ever will. She is on her own.

Still uneasy, the alpha looks around. Annoyed by the incessant empty yapping and slavering of the neutered cur that slinks along in his shadow he snaps at its neck, picking up a mouthful of mange for his trouble. He cannot be angry. The lesser pack is of his making. They reflect the face of his power, not the truth of it. They are useful and can be discarded without thought.

The shadows, as always, have awakened and fed his bloodlust. His pack, the lesser ones, senses his arousal. The females, both the mated and unmated, vie for his attention. The subservient males cower in front of him and the two lower alphas, once again, avert their eyes. The alpha, blood surging, moves toward the main pack. 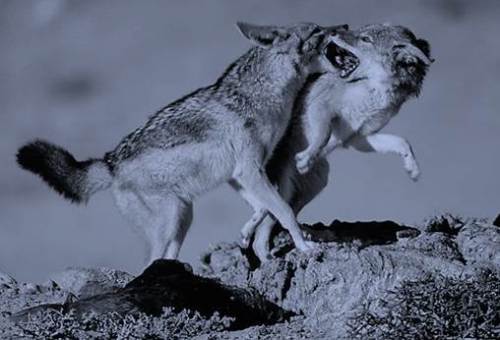 The attack is swift, brutal and many, too many, of the main pack are caught unawares. The elderly, sick, wounded. The pups. The defenceless. Not all escaped the attack. Bloodlust demands blood. Only quantity slakes the thirst. Quality is of no import. The seething rage of a deeply hidden impotence overtakes the alpha and his lesser pack. Fueled by the blood, a cruelty, once secretly nurtured, is now unleashed.

The battle rages. Most of the main pack avoid the fray. They take their pups, their elderly, the infirm with them. Others fight on. Ill-equipped. In disarray. Still they fight. The survival of the main pack depends upon them. This attack is stopped, for now. They prepare for the next. If they fail they know the attacks will become more frequent and more vicious. Debt, when owed to the shadows, demands ongoing payment in blood and meat. The defenders of the main pack, also Alphas, fight to deny the shadows payment. Fight hard enough and light will manifest itself out of the darkness. The shadows will be seen for what they are ……. the worst of what is in our hearts.

Having seen the conflict, its beginnings, its aftermath, the Alpha female leaves the mountain. She moves toward the shadows.