When I get older losing my hair
Many years from now
Will you still be sending me a valentine
Birthday greetings, bottle of wine?
If I’d been out till quarter to three
Would you lock the door?
Will you still need me, will you still feed me
When I’m eighty-four?

Like other Western countries, Australia’s population is ageing. In 1960, only 9% were aged 65 and older. In 2010, the proportion in that age bracket had increased to 13%.

This increase – and the increase is accelerating – raises a whole host of social and economic issues: employment, income support, health (and remember that for most people the last 12 months of life involve the highest health care costs), and aged care services for both independent living and nursing home accommodation.

This is a big issue, and one would expect that our politicians would have policies in place.

So, let’s compare and contrast.

Through historic reforms to the pension and aged care system, as well as investing in services and supporting older Australians to continue to work, Labor is giving seniors the choice, support and certainty they deserve.

It was Labor that first put in place the pension system in 1909 and it was Labor that delivered the biggest increase to the pension in 100 years in 2009. Labor also put pensioners first with the Household Assistance Package to help with their household bills. Pensioners often have limited room to move in their budgets, which is why Labor is helping them make ends meet.

Only Labor will continue to protect the pension for those who need it most – people who worked hard throughout their lives and who have given so much to our community. Tony Abbott and the Coalition plan to claw back $1 billion of this extra support for pensioners, leaving them hundreds of dollars out of pocket.

It was Labor that introduced universal superannuation 20 years ago, and now Labor is building on that work with our commitment to further increases and greater protections by gradually lifting superannuation from 9 per cent to 12 per cent in 2019. The first superannuation increase of .25 per cent takes place in July this year.

Since 2007 Labor has invested more than 70 per cent more funding into the aged care sector, adding more than 21,000 residential care places and 18,000 home care places nationally.

Changes are being made to the aged care system which will lift quality in residential aged care homes and allow more people to access care in their own homes.

Older Australians who want to live independently in their own home are more likely to have that choice: Labor is increasing the number of Home Care Packages by 40,000 — to nearly 100,000 by 2017.

From next financial year, means tested care costs will be capped, giving older Australians financial certainty and peace of mind. The residential care cost cap is $25,000 per year and home care packages are capped at $5,000 for part pensioners and $10,000 for self-funded retirees. And no one will ever pay more than Labor’s $60,000 cap over their lifetime.

To help people keep their family home, and to prevent anyone being forced to sell their home, Labor will give families more choice about how to pay for care. From 1 July 2014, instead of a bond which can cost millions and might bear no resemblance to the actual cost of accommodation, you will be able to pay through a lump sum or a periodic payment – or a combination of both. And from April next year, providers of care will need to publish their prices and ensure accommodation pricing appropriately reflects value. 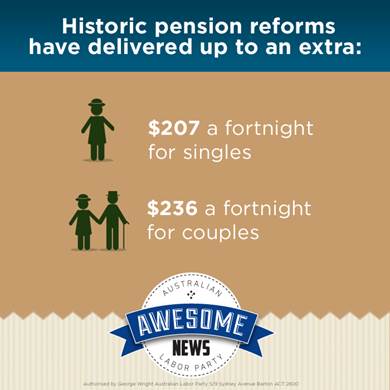 Any commentary in the “mainstream” media???

Now, what about the Liberals’ policy for older Australians? 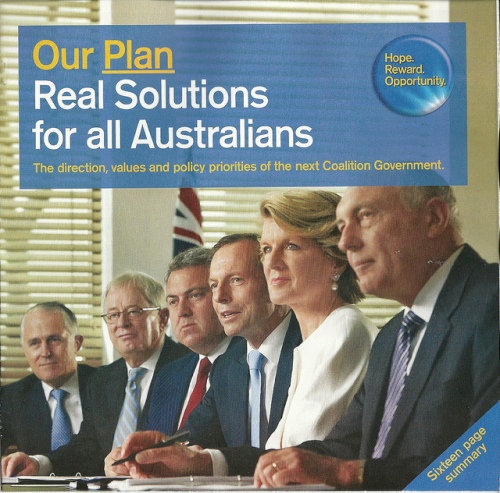 But we do know what the Shadow Treasurer, Mr Hockey, thinks:

In his speech to the UK’s Institute of Economic Affairs on 17 April 2012, he said:

In September last year I travelled to Hong Kong …

Without a social safety net, Hong Kong offers its citizens a top personal income tax rate of 17% and corporate tax rates of 16.5%. Unemployment is a low 3.4% , inflation 4.7% and the growth rate still respectable at over 4% . Government debt is moderate and although there is still poverty, the family unit is very much intact and social welfare is largely unknown. The system there is that you work hard, your parents look after the kids, you look after your grandkids and you save as you work for 40 years to fund your retirement. The society is focussed on making sure people can look after themselves well into old age.

The concept of filial piety, from the Confucian classic Xiao Jing, is thriving today right across Asia. It is also the very best and most enduring guide for community and social infrastructure.

The Hong Kong experience is not unusual in Asia. Characteristics such as low inflation, low unemployment, modest government debt, minimal unfunded benefits and entitlements, and significant growth are powering a whole range of emerging markets and developing an Asian middle class …

The sense of government entitlement in these countries is low. You get what you work for. Your tax payments are not excessive and there is an enormous incentive to work harder and earn more if you want to.

By western standards this highly constrained public safety net may, at times, seem brutal. But it works and it is financially sustainable.

Contrast this with what we find in Europe, the UK and the USA.

All of them have enormous entitlement systems spanning education, health, income support, retirement benefits, unemployment benefits and so on. Some countries are more generous than others and in many instances the recipients of the largest amount of unfunded entitlements are former employees of the Government.

In all these areas people are enjoying benefits which are not paid for by them, but paid for by someone else – either the taxes of those who are working and producing income, or future generations who are going to be left to pay the debt used to pay for these services.

These entitlements have now begun to hang like a millstone around the neck of governments, mortgaging the economic future of many Western nations and their enterprises for generations to come.

The road back to fiscal sustainability will not be easy.

It will involve reducing the provision of so called “free” government services to those who feel they are entitled to receive them.

It will involve reducing government spending to be lower than government revenue for a long time.

It is likely to result in a lowering of the standard of living for whole societies as they learn to live within their means.

The political challenge will be to convince the electorate of the need for fiscal pain and to ensure that the burden is equally shared.

So, there you have it – straight from the IPA songbook. Rugged individualism writ large – God helps those who help themselves. Tough if the kids don’t want to help out – your fault for not fostering that Confucian concept of filial piety. As for Mr Hockey’s unctuous statement that

we all know what the Liberals’ idea of equal sharing is: What’s mine is mine, and what’s yours is mine too.

And don’t forget that interesting comment from a Young Libthug which, apparently, Mr Abbott thought was a Very Good Idea:

As the Baby Boomer population of Australia gets older the younger people can’t afford to support them through the pension. So, if an Aged Pensioner owns a house or has some other property they would … have to sell the property and live off those funds. 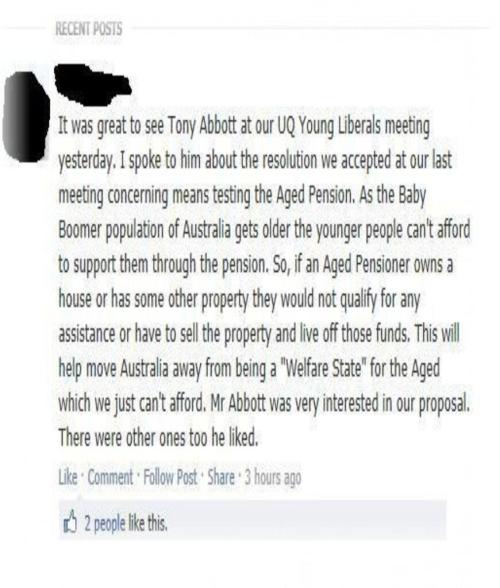 Well, at least that would mean the children wouldn’t be fighting over the estate once the parents fall off the perch – hmmm, maybe there is an upside to becoming a member of the SKI Club … After all, I’d never end up like this: