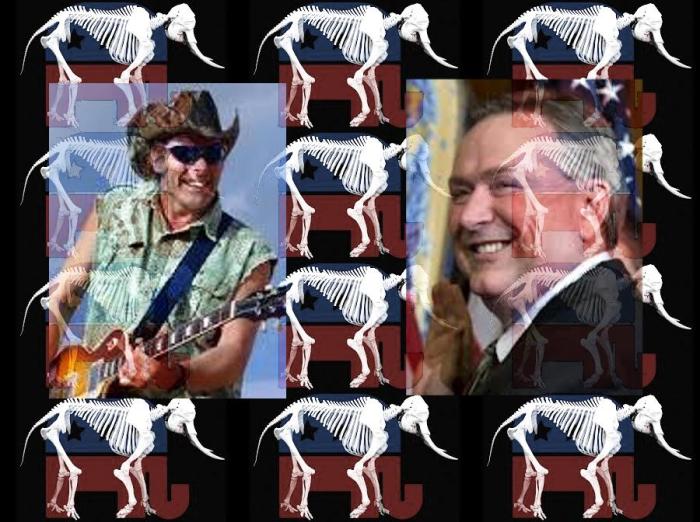 Only in America??
(QuickLink from yesterday’s AlterNet Headlines)

Is this something peculiar to Uncle Sam, or can we see elements of the colourful individual described in this article in some of our … quirkier … home-grown pollies?

NOTE: The title of this post does not mean that comments are restricted to matters American …

At some point we’re going to have to consider Texas a failed state. There should be a limit to just how dumb your representatives can be before it runs afoul of some trigger mechanism, somewhere, after which all the people who voted for that particular moron are stripped from voting again until they satisfactorily re-complete the fourth grade—but one problem with that, I suppose, is that we’d end up with the most unstable, heavily armed group of mustachioed fourth graders to ever grace our poorly funded public schools, and nobody wants to see that.

Rep. Steve Stockman is one of those representatives. Put more simply, his reelection should be taken as a sign that certain areas of Texas are still bitter at Somalia’s success, and even more bitter that they can’t just elect outright crooks like Tom DeLay anymore. Mostly known for being a nutcase one-term Congressman back in the nineties, Stockman made a brief name for himself with Waco conspiracy theories, gun fetishism, gun fetishism about Waco conspiracy theories, and a relationship with the NRA and anti-government militias that even for the 1990’s was fairly goddamn nuts.

Before and after that short and entirely unhinged shift in Congress, Stockman hasn’t had a political career so much as an ambitious, decades-long string of political failures punctuated by a few lucky breaks and more than a little friendly wingnut welfare (with an emphasis on molding young conservative minds via things like the Campus Leadership Program, and no, I do not know why that creeps me out as much as it does.) Still, for some reason a passel of ultraconservatives in Texas felt that it was finally time to give the obvious crazy person another shot in the big boy office, and Stockman is quickly making those Texans proud by being, well, as big a goddamn crackpot as he can manage without being hauled off for professional supervision.

Below the fold, let’s consider his absolutely insane one-month record so far:

He was only one of a handful of House Republicans to vote against John Boehner,

as the most spectacularly incompetent congressional coup of all time collapsed around its supposed planners.

In the wake of the Sandy Hook Elementary School murders, his response was to introduce legislation repealing the gun free zones around schools, and for the same reason as the similar NRA blustering—because what we needed, according to both, was to have manymore people wandering around school zones with guns, and that would probably work out just fine.

He was abruptly cut off in a Fox News interview after comparing Barack Obama to Saddam Hussein, thus managing to rank as one of the few crackpot Republicans too nuts even for Fox News to stomach.

When Obama introduced a set of executive actions that included things like “finally appoint a permanent head of the ATF, even if that makes Republicans sad” and “government scientists should be allowed to research gun violence”, Steve Stockman threatened in an exceptionally frothing statement to impeach Obama, if necessary, in order to stop such obviously scandalous things. This may have been the first, biggest sign that Steve Stockman is in fact a bona fide moron, but he quickly surpassed even that.

That brings us to Stockman’s latest episode of Congressional Moron Theater. In response to other politicians inviting Sandy Hook first responders, children, and other figures to the State of the Union, decided to rebut the presence of those people by inviting Ted Nugent, a man whose unhinged, violent rhetoric even managed to garner a visit by the Secret Service:

Nugent in the past has threatened to kill President Obama, Secretary of State Hillary Clinton and California Senators Dianne Feinstein and Barbara Boxer.

You might ask which parts of that cause Steve Stockman, in his official press release about the stunt, to refer to Ted Nugent as “a patriot”. I imagine it’s those very threats, because nobody, anywhere, has any idea what the vigorously self-emasculated Nugent actually does these days aside from drunkenly threatening members of the opposition while waving guns around. My own opinion is that Steve Stockman referring to the gun fetishist and possibly-drug-addled Nugent as a “patriot” in a press release is quite possibly a worse sin than inviting him to a government function at all, but that is because my idea of “patriot”, especially in the wake of the latest in a long string of horrific mass murders, does not revolve around telling the nation’s president to “suck on my machine gun.” For Congressman Stockman, it does. (And can you imagine any other actual member of Congress, in the past, so closely aligning himself with someone who wished violence against the government? Forget rebranding the party, Karl Rove, you may have your work cut out for you convincing Americans that Republicans aren’t for outright treason, given a few more years of this. Even secession talk is considered tame, now that “Obama, he’s a piece of shit, and I told him to suck on my machine gun” is considered the high point of Republican “patriotism.”)