Skip to content
HomeIn confusion is profit: Abbott wants the ante, not the pot. 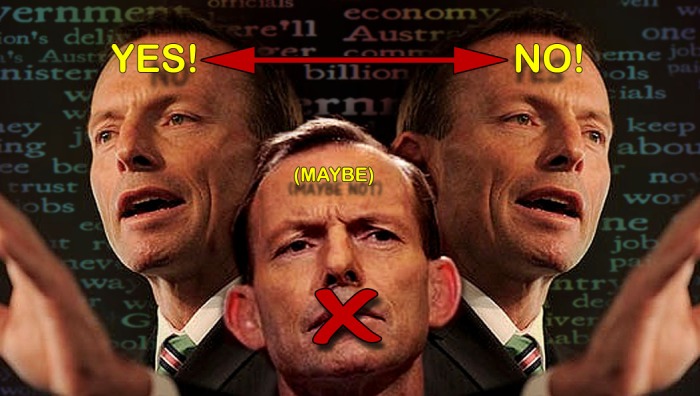 Q. How can you know a politician is a liar, yet still vote for him?

A. Because you believe he is lying, but you think can outsmart him.

The “mark”, the con man’s victim, thinking he is smarter than the con man is the essence of every scam from The Nigerian Scam, to the Pea-and-Thimble Trick, to modern Coalition politics under Tony Abbott.

Tony Abbott is conning us all.

Abbott is a liar. He admitted it to Kerry O’Brien on national TV, with a pissweak disclaimer that, if he put it in writing, he was telling the truth.

Go read his book or his latest pamphlet, and see whether putting it in writing makes his lies any less obvious.

No, Tony is a liar. He has to face it. It’s why he’s so unpopular. So he exploits that perception to confuse the punters.

It explains why his personal ratings are so low, but his party’s prospects are so high. The punters are betting he won’t be as bad as he seems to be. They think they’ve sussed Tony Abbott.

They know – or think they know – which thimble the pea is under.

Take the NBN: it would be objectively idiotic to “destroy” the NBN (although this is precisely Abbott’s instruction to Turnbull, and his boast). It would relegate our broadband connectivity to the equivalent of a Third World country, even worse than it is today. It can’t be allowed to happen. Too many people are hanging out for it.

But Liberal politicians, up to shadow ministers, are organizing petitions to have the NBN connected to their own electorates. They know how important it is. Their constituents – Liberal voters all, most likely – tell them to get it for them, and to get it FAST.

The natural deduction from all this in the mark’s head is that the shadow ministers “know something”. They “know” that Abbott doesn’t mean it. The “smart” voter sees this, and finds it possible to vote for someone who has vowed to get rid of the NBN, because the smart voter doesn’t believe Tony Abbott will ever get rid of it.

Let them catch you out with a lie, let them think they’ve got your measure… and then screw them with the big one.

The logic goes: “A liar who says he’s going to get rid of the NBN won’t get rid of it at all. Because he’s a liar!”

Conclusion: He’s only saying that to fool the other mugs.

A voter on ABC TV’s Sunday news bulletin said “We may as well vote for Abbott to give him a try.  He won’t be there forever, after all.”

This simpleton was wearing a reflective shirt and was driving a forklift. A natural Labor voter (you’d have thought), and clearly selected as such.

“Westie Man” thought that if we elected the Coalition to government, with Abbott as its PM, we could always get rid of him if it all turned to shit.

I felt sorry for this twerp. Of course the ABC played it to hundreds of thousands of viewers. It’s all part of the the softening-up for the con: admit Abbott’s a loveable rogue, “Tony being Tony”, and fool yourself you can fix it up afterwards if you’re wrong.

Westie Man doesn’t see how the process of voting has been debased by constant Reality TV and opinion poll exposure, to the point where it has no consequences other than an idle exercise of the whim of the moment.

The polls, a vital part of the feed-back loop, seem to confirm and reinforce his every whim.

The Campbelltown Klutz on the telly believes that if Abbott fails, then we can get rid of him, and that this will be sufficient punishment for him.

The talented scammer makes you think the con is bigger and more complicated than it really is, then fleeces you while you wait to catch him out. But, as in the Nigerian scam, the poor sod doesn’t realize until too late that he’s been stung.

What the victims don’t cotton on to is that the scammer will be long gone by that time. What the scammer wants is the seed money, the up-front “expenses” cash he asks for at the outset.,the ante, not the pot. Anything else is a bonus.

Tony Abbott wants  morons like Westie Man to think that for a small investment – his disposable vote on election day – he can get a chance to see how Tony Abbott turns out as PM. To that end Abbott and his bussed-in entourage go to Lidcombe or Rooty Hill and declare it to be “Liberal Party Heartland” (if you’ve ever been to either Western Sydney suburb you’d know how ridiculous that is as a proposition).

But Westie Man won’t see Tony Abbott for the dust after election day, if Abbott wins.

Tony will have shot through with his vote and used it to screw Westie Man good. Once Tony Abbott has walked in through the front door of The Lodge, his destiny is fulfilled. Bugger the punters.

We hear a lot that Abbott isn’t a doctrinaire as he is made out to be. We hear he’s a bit cruisier than a lot of people think. I actually believe that.

I don’t think Abbott gives much of a toss about politics, PPL schemes, the National Debt or even his religion. He only cares about himself. He’s the ultimate narcissist. His obsession is with winning, not doing. His joy is to intimidate.

All that “conviction politician” guff is just that: guff. It’s there to fool people into thinking he’s serious about policy, religion, morals and so on.

He needs the punter to concentrate on anything else except Tony Abbott’s overwhelming self-obsession. Like the true narcissist he is, Abbott loves to hear punters arguing over him and asking themselves, discussing, fighting over what they think he might he believe in.

He believes in nothing!

The main prize for Abbott is not governing. It’s power.

And Abbott needs useful idiots to provide it to him by plonking down their ante – their devalued vote – on the table in the hope of good cards to come. Then Abbott steals the ante.

The term “Useful Idiot” doesn’t just apply to voters. It applies to Tony’s own colleagues, some of whom (I’m prepared to concede) DO give a shit about governance and Australia’s destiny. Poor fellas them!

They probably see Abbott as their useful idiot. They think they’re smarter than him too, just like the forklift driver does. They think they can get rid of him easily if he doesn’t perform (which he won’t).

I’d go so far as to say Joe Hockey has a few reasonable ideas about where he’d like the country to go, how it should be governed, what priorities are important and so on.

Water off a duck’s back as far as Abbott is concerned. Joe and Andrew Robb can ferret away in the “Liberal Policy Unit” or the “Transition to Government” committee all they like. This just gives Tony more opportunity to put one over them.

They won’t know what hits them when – IF – Abbott becomes PM. Policy? Governance? Decency? A “kinder, gentler polity”? Go whistle, boys! Abbott is not their useful idiot. They are his.

Abbott will fail if he becomes Prime Minister. But it’ll be too late. The damage will have been done the day, they very day the keys to The Lodge are handed over to him.

The biggest mistake his supporters will have made is to have believed they could outsmart him, like you can outsmart a rat or a Nigerian scamster.

By the time they realize they’ve been had, Abbott will be in charge and dishing it out to anyone who gets in his way. Revenge and thuggery have been his lifelong trademark. Nothing’s changed.

In the meantime the nation will have to pick up the pieces and try to put them back together.

A wise man once said, “In confusion is profit.”

Ask yourself a question: can you, with certainty list even one policy position that Abbott has been consistent about? I bet you can’t.

The the layer upon layer of lies, half-truths, contradictions and falsehoods that Abbott, through a toadying media, has spread to make his position on any one  issue completely opaque have created the confusion.

The resulting profit will be all his, not the nation’s.

We will have only the mess to clean up and the derisive laughter of other countries to endure: the laughter that we could have been so easily fooled by the oldest con trick in the book, and the derision because we had it so good and threw it all away.

Don’t waste your time trying to make sense of Abbott. There isn’t any sense to be made. While you’re trying to work him out, to provide rational responses to his crazy ways, he’s ripping you off blind.

The only thing the punters need to realize is that you don’t get something for nothing. Don’t try to outsmart a con man. That’s what he wants you to do, while he rips you off.

518 thoughts on “In confusion is profit: Abbott wants the ante, not the pot.”